Now that the smoke has cleared away from Christmas and the New Year celebrations we start to look forward to the late winter and spring tastings put on by our suppliers.  It’s part of the planning process to fill gaps in the list and to discover new lines and new growers, as well as consolidating existing relationships with more familiar faces.  In short it’s time to go shopping and, as it’s the only type of shopping either of us can manage with a smile, it is usually fun.  Sometimes it’s challenging or frustrating, but when we have written off the non-starters and filtered through the shortlist to emerge with a clutch of exciting fresh ideas for the Wines of Interest 2014/15 Wine List, we are confident that you, dear customer, will have plenty to get your teeth into over the coming year.

Part of that process necessarily involves costing.  Obviously we would like to make a modest turn out of it - you can’t feed and clothe the children by giving it away.  One thing is for certain here and that is that no matter how much we sell, nobody makes more out of our labours than the government and it is the government which makes the major contribution to the expense of your favourite tipple.  Now, we all know that education, the NHS, the armed forces, the police and so on must be paid for somehow and that the principle of paying tax is sound, so we are not griping about excise per se.  Thus as Williamson bashes his calculator and redraws his spreadsheets after the spring budget, we understand why our industry is required to stump up, but what does irk is just how much.  Have a little trundle through some revealing figures to see the extent that we are lent on by ….


Did you know that the wine and spirit industries are worth £20 billion annually to the British economy and support, directly or indirectly, £40 billion of economic activity in the ?  The alcohol industries (ghastly description but you catch our drift) support nearly 2 million jobs in total.  Worth encouraging wouldn’t you think?

Since the introduction of the alcohol duty escalator in 2008 by Mr. Darling, wine taxation has risen by 50% and spirits by 44%, of which 25% for both categories was imposed by nice Mr. Osborne who picked up the baton when it became his turn.  Tax now accounts for 79% of an average-priced bottle of spirits and 57% of an average bottle of wine.  This will increase to over 80% on spirits and 60% on wine if the escalator is retained for 2014.  Don’t forget that every time the excise duty increases as part of our cost, the retail selling price also contains a growing amount of VAT.  You pay a tax on a tax.

Next time you hear the talking heads pontificating about the ’s alcohol problems, putting such troubles down to the cheapness of booze in this country, remember these statistics.

What beats me is just how the constant milking of our industry to this punitive degree squares up with government’s declared intent to create jobs and support growth.  It doesn’t look that way from here.  With the chancellor’s budget booked for March 19th the spectre of another increase looms large and, as the duty escalator’s rate is set at 2% over inflation, we could be looking at another significant hike.

This is not a partisan, anti-government rant; all the parties of whatever political hue have been equally unsympathetic to our trade down the years.  The fact remains that the , whilst apparently enjoying a modest measure of economic improvement, remains pretty well immersed in the proverbial cess pit, wherever you wish to lay the blame for that.  Thus we understand why tax revenues need to be guarded and we understand why the national belt has had to be tightened.  What we don’t understand is why our industry, which shows such obvious benefits to the nation, should once again be clobbered like no other sector that we can think of, which results in the long term stifling of one of our more successful industries and contributors of revenue.

In short, we’ve paid already.  Go and fleece somebody else for a change, George.  Oh, and don’t defer it for a year, DO IT NOW.

If any of you feel similarly but do not know where to express that frustration, please go to http://action.calltimeonduty.com/  hosted by the Wine and Spirit Trade Association and endorsed by The TaxPayers’ , where you can find out more about this issue and send a pre-prepared, electronic letter to your local MP.  The words and major points are already there for you so please feel free to make your voice heard.  There’s an election in the offing and the current incumbents could do with a splash of popularity so it may well be a good time to nudge the chancellor in this direction.  If he sees sense but leaves it any later and it’ll look like a bribe.

Of course, if you actively wish to pay more for your booze and see further hurdles shoved in front of your favourite pub or restaurant and the vital tourist industry, please feel equally free not to do this….. 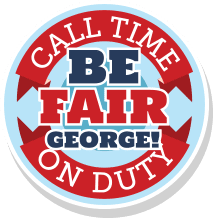 Typically we send 2-3 emails each month so you won't get floods of stuff from us, though we do send out more emails in November and December.  You can unsubscribe at any time should you ever change your mind.